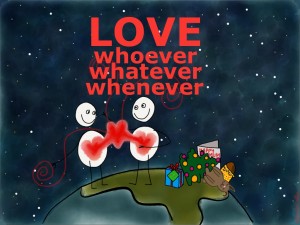 Why Celebrate Mother’s Day, or Any Other Holiday?

This morning I was hit by a wave of uncomfortable emotion as the topic of ‘Mothers Day‘ was brought up. I wouldn’t have known that it was Mothers Day tomorrow, because I don’t watch TV, I don’t read magazines or newspapers and I don’t listen to the radio. However, the TV has been on in the home where I’ve been for the last week and whilst I’ve been plugged into podcasts on my ipad, I’ve noticed advert after advert after advert with Mothers Day things going on. I figured it was out there but didn’t know when.

In fact, I remember when catching a glimpse of an ad thinking to myself ‘Oh, Mothers Day, it’s probably not even happening for another few weeks’ knowing how much bigger and more important our holidays are getting.

Anyway it came up this morning that it is in fact Mothers Day tomorrow on March 15th and I when said ‘I didn’t know’ that was the truth, I didn’t. I knew it was out there, but I didn’t know when it was scheduled.

When I said I didn’t know it was tomorrow I was met with slightly disbelieving and disapproving eyeballs, but seeing as I’m coming from a Human Design angle here it’s probably more accurate to say I was met with an unconscious transmission of emotion of some uncomfortable kind. I felt the discomfort stress out in my own body and then I mentally and emotionally went straight into what’s always happening for me, as an open-emotional, sacral being – “Why do I feel so shit? Urgh, I feel terrible, I must be bad, I must be wrong, I’m a terrible person.” The wave got me and I translated it as my own ‘guilt and shame’. Classic.

This is one reason why I don’t appreciate all the hype and obligation that goes on around public holidays. There’s so much expectation, so much you’re ‘supposed to do’ so much you’re ‘supposed’ to play along to. So much playing along with societal rules. So much so that if you stick your head out and say “I’m bored of this game. I’m not playing anymore.” You get shot. Hit with the naughty stick.

I can understand that most people like to take these public holidays and do what everybody else is doing, use them as a way to celebrate what and who is in their lives, and I’m sure that it’s great for many. But that’s not how it always feels to me. It’s not that I’m totally against public holidays, or whatever they’re called (are they called public holidays?), I’m just against the collective expectation that everyone should play along. I feel uncomfortable with it.

To me it feels like the world is telling me what to do and when to do it and this feels so damn out of sync to me.

My Human Design Celebrates When She Wants To

Especially since living my human design. My Human Design – Sacral Generator Aura teaches me when to and when not to use my energy. Being in the company of two emotional manifesting generators who are just sharing their beliefs and opinions about how Mothers Day should be celebrated, I could feel that uncomfortable sacral contraction – UHUN. And then I could feel something being transmitted out of the emotional beings auras, my open centre sucking it all up, leaving me feeling really shit and bad in my own aura.

My inner critic got jabbed, woke up and went ballistic “You’re just a horrible bitch You’re just evil. There’s something wrong with you. You’re just a miserable cow. Why can’t you be normal (wtf is normal??) and do what everyone else does?” I had to create some space for myself to release that energy from my system and give myself some self love, self approval with my own beliefs and truths.

(I think there’s a mixture here of me just being my totally over sensitive paranoid self blended in with the porous sucking up of others discharged emotional emmisions. I’m still learning the very challenging lesson of ‘what’s mine’ and ‘what’s not’.)

Anyway, despite where ‘my’ feelings are coming from it still feels wrong to me to feel obliged to ‘give’ or ‘celebrate’ something just because of tradition and because it’s what everyone else is doing.

I don’t want to celebrate my mum when I’m told to. I want to do that when it happens naturally.

I don’t want to receive gifts from others because they feel obliged and guilty if they don’t give. I find it extremely hard to feel grateful for that energy. In fact I feel in my aura how off it is and I cringe to appreciate it. I’m not saying this happens all the time, or course it doesn’t. But it does happen sometimes.

I am so sick of these programmed holidays that are becoming bigger and bigger excuses to show love, and people are showing their love through gifts. Damn it, just BE LOVE, regardless of when it’s appropriate to be it and show it.

(I’m not saying I’m some kind of LOVE guru, I’m not. I often feel challenged, vulnerable and awkward expressing love and gratitude)

If I do respond, then I’ll celebrate in my own way.

Some of the most yummiest gifts I’ve ever given have come from those inspired random places and times. And without a doubt some of the biggest appreciations for what I’ve offered have been magnified because of the utter randomness.

For example, I once organised and chucked a massive surprise party for a friend of mine, JUST BECAUSE! (Awh, man, that was a fantastic night, so much joyful, inspired effort and so much fun in it.) One of the best things about that surprise party is that it was for no reason what so ever, other than that I had responded to the idea of it from the ‘Random Acts of Kindness’ book. I just then went ahead and did it, loving every moment. This is what I mean by doing things in my own rhythm. The joy my friend got from that unexpected experience was monumental.

I Want To Celebrate in My Own Rhythm

So, it’s not that I’m a miserable, un-celebrating bitch. It’s just that I have my own song to sing and my own dance to dance. I am breaking free from as much conditioning as I can in order to discover and liberate my free, true, Divine, outrageous, inappropriate self.

I do not want to feel obligated to play along with tradition, which is basically another form of conditioning that’s going on. I want to be free of all that shit. I want to experience my own celebration and generosity when it arises in its own natural way. In my human design I have gate 5 ‘Fixed Rhythms’ meaning I have my own sense of timing and it is very important for me to honour that.

If tomorrow comes around and I get that inspired feeling, moved through spirit to get, give or make something for my mum, then I’ll do it, because that’s a directive coming from my inner being. But if I’m feeling the crush, the push, the sacral contraction to not do so, then I won’t. That would be me using my life force energy in the wrong way, which is a bit like wearing a big heavy cloud of UHUN. If I try and move and act through that it literally feels like my whole aura wants to vomit!

Likewise if I have a day, a moment, a time where I feel like creating, making, doing something for someone, and there’s something in my environment, life that I’m responding to make that happen, then there goes that lovely sacral expansion. Life force being spent in the most delicious way.

What About Other People?

I’m sure some people might be thinking ‘Well, what about your mum? What about the other person‘ Hell man. Why do you think so many people can’t manage living their human design? Because most people can’t bear to let other people down. It’s excruciating. However, there are some of us who live with excruciating inner torment for not following our truth. To not play the game of ‘making others happy’ goes against how we’ve been trained to be. It isn’t going to be approved of is it. And we are all such approval addicts.

It’s so hard to start learning how to give to yourself, to acknowledge your own needs, to put yourself first. But when you’re on a deep healing path it becomes necessary to learn about this.

I want to know if you can
disappoint another
to be true to yourself.
If you can bear
the accusation of betrayal
and not betray your own soul.

So, still feeling scratchy around being told when to express my love, I’ll see how I feel tomorrow.

And Mum, just in case you read this, I love you, every day, not just Mother’s Day.

Wanna know how blogging about my life is part of my Online Business? Check it out here x

If you want to find out about your human design go here – www.jovianarchive.com