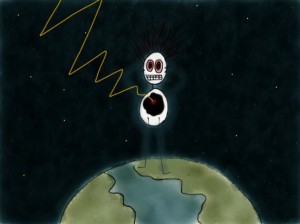 This is a Shit Man.

I’m going to tell you a story. It’s about why my little illustrated men are called ‘Shit Men’.

Back in early 2008 I had a very scary experience. For the previous 6 months I had been escalating up a cycle of mania and come February 2008 I had a terrifying breakdown.

I had never ever experienced such intense terror. The fabric of my reality was ripped to shreds and everything I understood about life was dissolving and slipping away from me at a rapid rate, leaving me groundless, disoriented and very, very frightened.

This breakdown shook me so fiercely it would take me until now (and still onwards . . .) to recover.

In 2009, after a year and a half of dramatic roller-coaster flies and dives, I was finally diagnosed ‘bipolar 1’, that’s the type of bipolar that has massive out there highs and massive in there lows

I was terrified of being put on a psychotropic medication that would crush my spirit and have me become dependent (fears that stem from me being an insulin dependent diabetic) And, I also had a growing understanding of the metaphysical aspects of illness and disease. Therefore I refused all medications. It took me super human strength to stand my ground and do so. Quaking in the shadow of determined  psychiatrists who are wanting to ‘put you in hospital’ is thee most scary thing I’ve ever experienced.

I stated clearly that super human ‘NO’ and instead was put under the observation of a crisis team – and there my REAL healing journey began.

For the next few years or so I continued to struggle deeply with living, with staying alive, with facing my deamons, with managing voices and visions in my head. I honestly look back now and wonder how the hell I got through some of the places I’ve been.

Whilst travelling through this phase of my life I experienced so many freaky anxieties, particularly around others. My whole system and aura was attuning to frequencies and vibes I’d never been able to perceive before and I just didn’t know how to handle it. I developed crippling social fears and paranoias. I never thought I would ever be ‘ok’ again.

By 2011 I was living with two flat mates. Living with all ‘the noise’ inside me whilst trying to fit in around others was, I’m sure, what was costing me so much energy. (I still experience this now but am getting stronger) (note – my flatmates were truly wonderful in many ways)

I would often find myself trying to figure out the invisible energies that were at play between me and others. I was always trying to figure it out because the voices in my head were telling me that it was ME. Depression feeds off of that.

So, in my journal, after figuring out that I couldn’t decode what was happening between me and others, I decided to see if I could illustrate it with little stick men.

Here Shit Men were born. I was attempting to ‘see’ how energies were acted out, distributed, projected, owned, disowned. I saw it as ‘dark energy‘ and renamed it ‘Shit’. I wanted to see how ‘shit’ got moved! 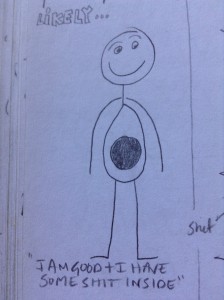 That’s me recognising my shit 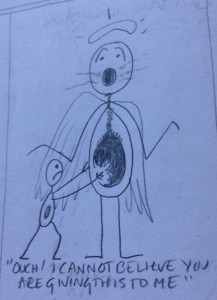 It’s nothing to do with me, it must be YOU! 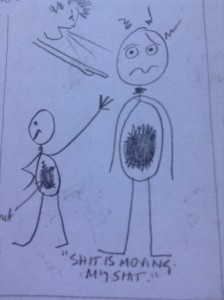 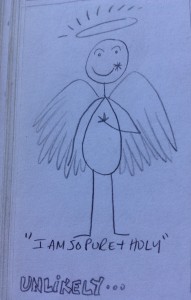 I wanted to understand when shit was being given to me 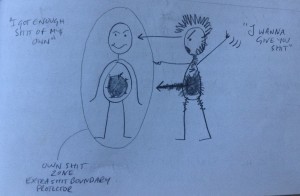 I started playing around with nice shit . . . 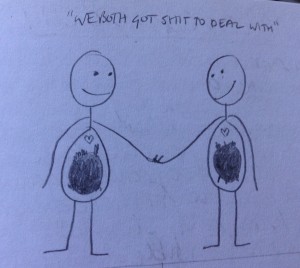 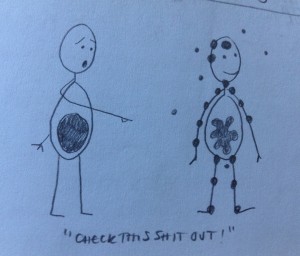 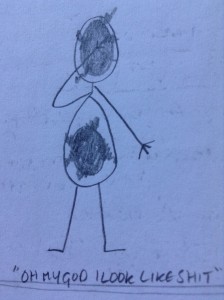 I was getting some fun out of my ‘trying to understand’ shit!

Fun back then was rare. Shit wasn’t. 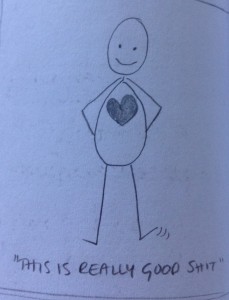 I’d found a playful way to lighten my inner and outer paranoias and investigations. I’d doodle here and there. Whenever I’d get completely perplexed over a communication I’d draw it, see if I could understand it. When I felt good I’d draw it. I started to ‘see’ the feelings I was trying to integrate.

This was all to help myself. To help me stop beating up on myself. Remember, I was regularly in deep agitated depressions, or, strung out angry manias.

And then after my initial investigations into ‘shit’ I forgot about drawing Shit Men for a while.

I was starting to recognise and deal with shit better. But I wasn’t free (still am not)

Then I got my iPad. 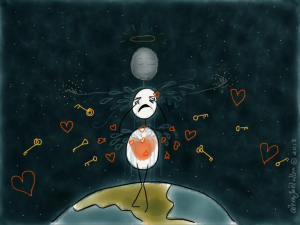 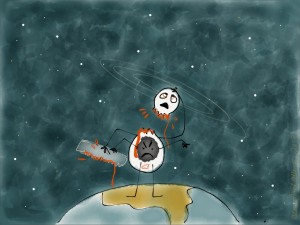 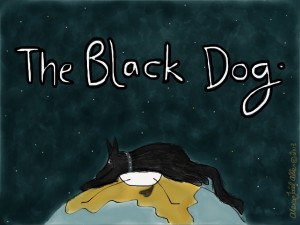 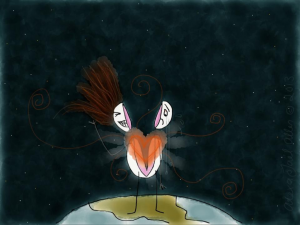 I started being able to recognise when LOVE was at the core of my states, and when it was just pure fear. 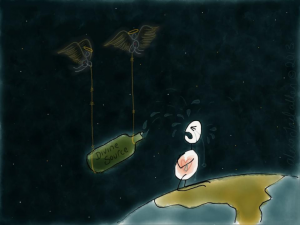 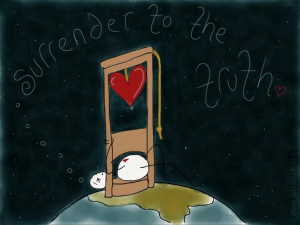 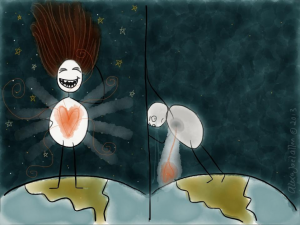 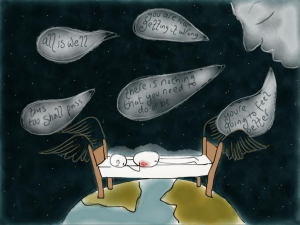 My drawings were becoming a main part of my healing. Without me noticing the ‘shit’ was gradually getting replaced by ‘hearts‘. 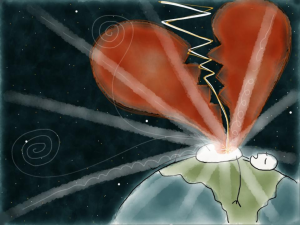 So, even though, nowadays mostly my Shit Men have hearts, they are still called ‘Shit Men’. They’ve been with me through my journey of Shitness. They have super sonically helped me connect with myself, love myself and find humour and relief if the darkest places.

I always imagined that if I’d start sharing them as artwork, cards, that I’d like to donate 10% of anything made to a mental health charity like MIND. This is something I’m still playing with . . .

Thanks for reading x and to all of us who have ever struggled, will ever struggle, or know someone else who struggles with mental illness (so, that’s all of us then) may me and my Shit Men wish you love, support and blessings in your journey. It’s a tough one I know. But when it’s good, it’s good. Don’t be afraid to enjoy those good times. keep it real, BE your TRUE self and find a way to express and share your shit man x